Using coconut oil for skin is naturally healthy and absolutely safe. Unlike other skin oils, coconut oil is made up of fatty acids that are native to your skin.

Medium Chain Fatty Acids (MCFA), the primary fatty acids in coconut oil but “absent” in other oils, are a normal component of your skin’s barrier layer. Simply put, MCFA-rich coconut oil serves as a natural replacement for lost oils in your skin.

Many dermatologists like using mineral oil because it is available as pure oil. Like coconut oil, it rarely causes skin reactions and doesn’t clog pores.

In a study comparing mineral oil to coconut oil as a therapeutic moisturizer, both oils significantly moisturized the skin. And neither oil caused irritation, allergy or other adverse reactions. But it gets more interesting…

The researchers also concluded that compared to mineral oil, coconut oil spreads easier and absorbs better into dry skin. Coconut oil for skin also creates a better feel during and after application, and produces an agreeable aroma.

Note that mineral oil is a hydrocarbon distilled from petroleum, the non-living thing used in making gasoline for your car. Coconut oil is an organic food from the tree of life. Your choice… 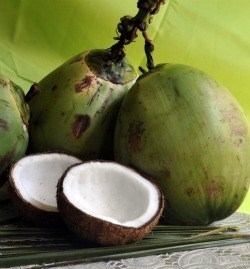 In another study comparing coconut oil to six widely used antibiotics including penicillin, the investigators discovered that coconut oil has a higher ability to clear infectious bacteria in laboratory dishes (in vitro).

The bacteria used such as strains of Staphylococcus and Streptococcus, just to name some, are found in common skin infections obtained in a hospital setting.

Monolaurin, a monoglyceride component of coconut oil, was able to achieve a high clearance of all six of the bacteria tested. The antibiotics were not as effective, some had high but others had low clearances. Monolaurin-rich coconut oil had high clearances across all bacteria.

Massage a generous but not dripping amount of coconut oil on your face, neck, arms, chest, buttocks, thighs, legs, feet, nails and cuticles. Did I miss something? The small structure of MCFAs enables them to enter your pores in no time to begin working their magic. First externally, then internally.

Coconut oil strengthens your skin’s connective tissues, making it smooth and supple. Wondering if your skin is functionally younger or older than your true age? Try this fast and easy skin elasticity test. You could be in for a surprise.

Apply coconut oil topically to reduce symptoms associated with eczema, psoriasis and other forms of dermatitis. Make this a habit at least once a day to help form a chemical barrier on your skin that is inhospitable to germs.

Use coconut oil for skin to soothe muscle and joint aches and pains. Rub warm (not hot) oil deep into affected areas for best results. Do not use a microwave to warm the oil up. Heck, don’t use a microwave at all with any of your food.

When it comes to healing cuts, wounds, burns and other similar injuries, even insect bites, nothing compares to The King of Oils. Just try it and you’ll be amazed at how quickly coconut oil can repair the damage.

Use Externally and Internally

Remember, for optimal results, you should use the oil directly on your skin (externally) and consume it (internally), as well. Some people take eating the oil for granted. Don’t make that mistake.

The best time to use coconut oil for skin is after taking a bath. Ironically, it is after bathing that your skin is at its most vulnerable to infection due to loss of natural body oils stripped away by harsh soaps, etc.

Use Coconut Oil Soap for a Wholesome Lather Up

Virgin Coconut Oil for Hair: Hair Care that’s as Good as It Gets

Coconut Essential Oil: The Most Spectacular Oil on the Planet

Coconut Oil For Cuticles: Why it Works and How to Use it

Tell Us What Coconut Oil Did For Your Skin

What is your favorite coconut oil skin benefit? Share it here and give others the opportunity to discover and try it!

What Others Have Shared

Mole Be Gone!
I had a mole on my side for years. It appeared to start to change so I put a little coconut oil on it morning and night, and within one month my mole …

Coconut Oil and Tattoos
I’ve heard that coconut oil has such great healing powers, it will pull ink from tattoos out of your skin. Is this true? An artist told me a customer …

Extreme Dry Condition and Irritation
A few months ago I bought two jars of Spectrum’s Organic Coconut Oil and used them liberally over a 4-week period. During that time my skin got progressively …

Coconut Oil for Pityriasis Rosea and Guttate Psoriasis
I have pityriasis rosea since 2006. First I sought medical advise and a dermatologist gave me a lot of creams/medications… It got cured but after two …

Sensual Coconut Oil
I am a 35 year old woman who survived cervical cancer. With this cancer, I had to undergo radiation and chemotherapy. The radiation burned my ovaries thus …

Lost EIGHT Pounds in ONE Week and Cleared Up My Skin!!
Well, I live with my bf and his roommate who are both health enthusiasts and C.M.T… I started reading up on coconut oil about four months ago and discovered …

Please Help Me with Some Answers Regarding Coconut Oil on the Face
I began using virgin coconut oil one week ago taking it internally and applying it to my face. My face is now so dry and flaky I am not sure what is going …

Overnight Results!
I’ve always relied on commercial branded products for my skin. After reading for quite some time on the skin health benefits of coconut oil, I decided …

Not After TCA Medium Peel Not rated yet
I used coconut oil only after my 25% TCA peel and it caused the dead skin to dry, crack and peel prematurely. It acted as an oil barrier but did not …

How Do I Make or Buy Coconut Oil Soap? Not rated yet
So, what do I do? Do I add the oil to my liquid soap that I use in the shower, or is there a recipe to make some myself? Can I buy it already made? …

Gunking Up the Sink Comment & Questions Not rated yet
I’ve been incorporating many of your suggestions into my daily routine since discovering your website about a week ago. I’ve been washing my face with …

Apply Coconut Oil on Skin Before Shower Not rated yet
You can apply coconut oil on body liberally and leave it on for 20 minutes and then take a shower using your normal soap, leaving your skin soft and …

Works As Well or Better Than Anything Not rated yet
I used coconut oil on my face after doing a series of TCA peels. Most people recommend emu oil but I used a coconut stick that I got from the health food …