I believe that Medium Chain Fatty Acids (MCFA) lavishly found in coconut oil, overall, are the most beneficial fat molecules known to man.

MCFAs stand head and shoulders above other fatty acids, possessing a powerful health-boosting package you won’t find anywhere else in the kingdom of fats and oils.

Coconut oil owes much of its incredible healing properties to MCFAs.

Up to 70 percent or more than two-thirds of coconut oil are composed of MCFAs, making it nature’s richest source of these special and relatively rare fat molecules.

There are three MCFAs. The 8-carbon Caprylic acid (C:8), the 10-carbon Capric acid (C:10), and the 12-carbon Lauric acid (C:12). Of the three, lauric acid, which make up more than half of coconut oil, has the greatest overall antimicrobial effect. 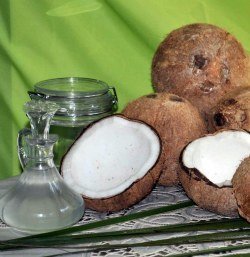 In October 1998, Juliet Figueroa was diagnosed with an aggressive form of breast cancer. After consulting five doctors, she agreed to go through surgery, and subsequently, several months of chemotherapy. By 2001, the same aggressive cancer had now spread up into her skull. Again, she underwent surgery.

Feeling weak and knowing that her chances for survival were grim, she came across some research on coconut oil. She started taking 3-4 tablespoons of it daily, cooked with it, snacked on fresh coconut, and drank coconut water.

After six months, her doctors in the United States conducted tests. To their surprise, Juliet had gone into remission. When asked what she had done, she told them “she found a cure…” MCFA-loaded Coconut Oil! Today, she continues to use coconut oil and she is cancer free!
Coconut Oil › Medium Chain Fatty Acids