Do you want to lose weight without even trying? Then ditch the kitchen oils you’re using right now and switch over to a coconut oil diet.

You don’t have to change anything else in your diet. Just an oil-change will do!

The Only Low-Calorie Fat

Now, I know the difference isn’t much. Still, it has fewer calories. That’s the fact. All things equal, consuming coconut oil instead means you are taking in smaller amounts of calories that could potentially be stored away as body fat.

But the fact that, coconut oil or coconut butter is the only low-calorie fat from nature, is not the main reason why it is so good in helping you lose excess body weight.

Since the thyroid gland plays a significant role in regulating metabolism, it also follows that coconut oil can help jumpstart a sluggish thyroid. Great news, especially if you’re suffering from hypothyroidism.

Research have shown that just one meal containing Medium Chain Triglycerides or MCTs (the predominant saturated fat molecules found in coconut oil), can elevate your metabolism for up to 24 hours. That’s one full day of accelerated calorie-burning, which also translates to an increased energy-level. 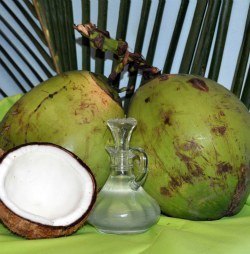 Another reason for its low-fat distinction is, coconut oil satisfies your hunger better than other fats and oils. Probably better than any other food as well.

When you eat it by the spoonful, by adding it to your food and drink and/or by swallowing coconut oil capsules, you become satisfied sooner and don’t get as hungry between meals.

With a coconut oil diet, it’s easier to avoid snacking (usually junk food) before your next meal.

There is a study published in the International Journal of Obesity which compared the effect on hunger between MCTs and LCTs or Long Chain Triglycerides.

The researchers discovered that the more MCTs the subjects ate, the less food they consumed. In other words, using MCT-rich coconut oil lowers your calorie consumption and the possibility of gaining unwanted weight.

I would venture to say that almost all the dietary fats and oils (soybean oil, corn oil, olive oil, canola oil, beef, lard, etc.) you eat are composed entirely of LCTs.

This is especially true if you live in the United States and follow the Food Guide Pyramid to the letter. Ouch…

Coconut oil is unique because most of it is made of MCTs. In fact, it is nature’s richest source of MCTs. There are very few natural sources of these health-boosting fat molecules.

Much of the health benefits of coconut oil are powered by MCTs or more specifically, Medium Chain Fatty Acids or MCFAs.

If you ask me, coconut oil’s weight-reducing properties are more than adequate to put it head-and-shoulders above most other dietary fats out there. But there’s more to it than just safe and lasting weight loss – much more!

What if I told you that coconut oil can also kill harmful bacteria, viruses, fungi, parasites and protozoa? Too good to be true? I know, but it really is the truth! All these health benefits are yours when you adhere to a coconut oil diet.

The table below illustrates some of the harmful organisms destroyed by MCFAs abundantly present in coconut oil. Note that this is a “very” short list.

Do not believe anyone who claims that a typical coconut diet, especially the oil, promotes heart disease. It doesn’t matter how loud they ignorantly say it or how much influence they peddle. There isn’t a single study or research that can prove natural coconut oil causes heart disease. I guarantee you that!

On the contrary, numerous studies have demonstrated that, at worse, it is neutral in the development of heart disease. In reality, a coconut oil diet even prevents it!

But hey, if you can show me some very recent research proving me wrong, please enlighten me. Good luck, though…

In the world of cooking, the more saturated the oil is, the more stable it becomes. At 92 percent saturated, coconut oil is the most saturated fat on the face of the earth. None of its fierce competition even comes close.

Using coconut oil for all your cooking and food preparation is a super easy and surefire way to ensure that you’re eating the right kind of fat, which reminds me…

Time to watch some DVD. Coconut oil popcorn, anyone? Who would have thought that chowing down popcorn can actually be good for you. With the coconut oil diet, it’s possible!

Organic Coconut Oil Benefits for a More Beautiful You