Coconut oil popcorn is a nourishing way to enjoy munching one of the all-time favorite snacks.

It’s a good example of how using the right ingredients can make food healthier and more delicious.

Unlike other oils used to prepare popcorn, coconut oil is primarily made up of Medium Chain Fatty Acids (MCFA), a rare type of fat molecules capable of protecting you from a broad range of harmful organisms such as viruses, bacteria, parasites, fungi, worms, etc.

Aside from being the mightiest “antimicrobial” fatty acids known to man, MCFAs are mainly used by your body to generate energy. These saturated fatty acids stimulate your metabolism and are rarely stored as body fat.

In other words, MCFA-loaded coconut oil is Pro-Energy, not Pro-Fat. There are very few natural sources of unique MCFAs and most of them are found in coconut oil.

The Envy of All Popcorn Oils 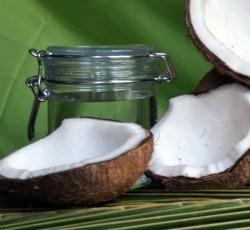 Because it has a moderate smoke point of 350 degrees Fahrenheit, coconut oil is ideal for preparing popcorn. More importantly, it is 92 percent saturated, making coconut oil the most stable dietary oil on the planet.

It wasn’t long ago when coconut oil was used heavily in the United States for cooking popcorn. In fact, it was THE vegetable oil for popcorn. Well, money spoke the loudest again, it would seem.

As a direct or indirect result, obesity and a number of other diseases like heart disease rose to epidemic proportions. Now I’m not saying coconut oil was the only factor in all this. That would be irresponsible of me.

What I’m saying is, once again, profits took a front seat over wellness. Popcorn was kind of the last frontier wherein Americans could still experience amazing health benefits from coconut oil, “The Greatest Oil on Earth.”

Health-wise and taste-wise, coconut oil and popcorn is a perfect match made in snack heaven.