One of the dangers of coconut oil, despite of its unrivaled health benefits, is coconut-induced brain injuries. But don’t worry. If you live outside the tropics, your chances of getting brain damage from the humble coconut are zero.

A single coconut containing coconut oil (The Healthiest Oil on Earth), when dropped out of a 100-foot tree, can deliver one metric ton of force. That’s enough force to inflict extremely severe, even fatal neurological damage.

This is the reason why people who live within close proximity to coconut palm trees have the highest incidence of coconut-induced brain injuries.

Even more injuries come from people falling out of trees than from falling coconuts. In an attempt to pick coconuts to make some coconut oil for optimal health, people sometimes fall climbing those more than one hundred foot tall trees.

On a more serious note, the dangers of coconut oil on your heart, as echoed by its enemies and misguided folks, are not true at all. It’s a fallacy that has duped and victimized millions of people around the world.

There is no scientific study that shows coconut oil promotes heart disease. Not even one! On the contrary, several studies will prove that coconut oil, at worst, is neutral in the development of heart disease.

Even better than scientific journals, in my opinion, are epidemiological or population studies showing coconut oil-eating people are exceptionally immune to heart disease. For example…

Of all Filipinos, my Bicolano countrymen consume the most coconut oil at a massive 62.4 percent of their fat calories. If coconut oil causes heart disease, then why do they have “the lowest heart and brain death rates in the entire country?” 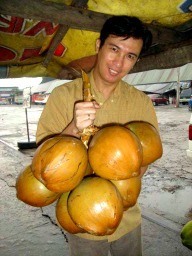 The oil of the coconut is so safe, even the United States Food & Drug Administration (USFDA) has included it in its exclusive Generally Regarded As Safe (GRAS) list. Yes, the FDA considers coconut oil to be a safe, natural food.

Coconut oil is one of the safest and most nutritious foods God is providing mankind. It has no harmful side effects, even the elderly and malnourished infants can consume it.

You have a far greater chance of getting injured standing next to a coconut palm tree or falling off of it than there is in using coconut oil. The dangers of coconut oil on your brain and heart don’t exist, seriously…

Lose Weight with Coconut Oil, The Fat that Makes You Thin