Antimicrobial coconut oil is the world’s most powerful! No other dietary fat can equal, let alone go beyond, the awesome overall antimicrobic punch of coconut oil.None!

Coconut oil epitomizes the phrase “Not All Fats are Alike” in more ways than one. But it’s in the area of killingharmful microorganisms that coconut oil really leaves the rest behind.

Olive oil, soybean oil, beef fat and almost all other dietary fats and oils are entirely made of Long Chain Fatty Acids (LCFA).

Coconut oil is different because it’s mostly Medium Chain Fatty Acids (MCFA). There are only few sources of MCFAs and most of them are found in coconut oil, the crowning glory of the palm tree coconut.

Unlike LCFAs, MCFAs have the special ability to kill a broad range of pathogens. No wonder mother’s milk, nature’s perfect food, has MCFAs. In fact, the presence of MCFAs in breast milk is the leading ingredient that defends newborns from infections for the first few months of their lives, while their immune systems are still evolving.

The pathogens that appear to be most sensitive to MCFA-loaded coconut oil and its monoglycerides are lipid coated ones. Bacteria and viruses encased in a lipid (fat) membrane absorb them into their outer layer, unaware that these fats have a damaging effect.

MCFAs and their monoglycerides disintegrate the membrane until it collapses and kills the organism. Thanks to this very efficient process, even bacteria that have become antibiotic-resistant are destroyed. Coconut oil can be used again and again without organisms developing resistance to it and transforming into so-called supergerms.

Here are some of the microorganisms exterminated by MCFAs abundantly present in coconut oil. 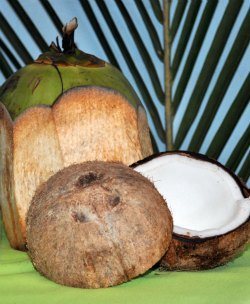 Even the dreaded HIV that causes Acquired Immune Deficiency Syndrome (AIDS) is vanquished by coconut oil. The first clinical trial on HIV treatment with coconut oil was done in 1999 at the San Lazaro Hospital here in the Philippines.

At the end of the study, 8 of the 14 patients had a decreased viral load, 5 had an increased CD4 count (the cells involved in protecting against viral infections), and 11 regained weight. This initial trial confirmed anecdotal reports that coconut oil does have an antiviral effect, and strong at that.

MCFA-packed coconut oil is the mightiest antimicrobial dietary fat or oil on the planet. Studies that support such claim abound. But most of all, coconut oil works in “real life” – the true measure of effectiveness.