Lauric acid or dodecanoic acid, its chemical name, is the most potent fatty acid there is. And most of it is naturally found in coconut oil, the healthiest oil there is.

More than half of the fatty acids found in coconut oil is lauric (C12). Together with caprylic acid (C8) and capric acid (C10), these three make up the medium chain fatty acid (MCFA) content of coconut oil.

MCFAs are the “antimicrobial powerhouse” behind coconut oil’s ability to cure and prevent a growing list of disease and illness. Lauric, capric and caprylic acids and their respective monoglycerides, monolaurin, monocaprin and monocaprylin, all exhibit antimicrobial activity that boosts your immune system.

Of all the MCFAs, lauric (C12) acid appears to have the greatest overall effect. Below are just some of the microorganisms destroyed by this mighty MCFA. 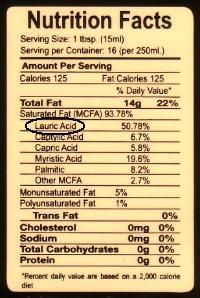 Lauric acid is not just about killing bacteria, viruses, fungi and other harmful organisms. This magnificent MCFA tends to improve cholesterol ratio by increasing HDL (good) cholesterol. It also enhances the ability of your pancreas to secrete insulin.

Like coconut oil, lauric acid is also the primary saturated fatty acid present inmother’s milk? Its ratio to other MCFAs in mother’s milk is similar to coconut oil.

The immune system of a newborn is weak and still developing. Studies have shown that the lauric (C12) acid in breast milk is the main ingredient that protects infants from infection for the first few months of their lives.

Research has been so compelling that companies are now marketing dietary supplements containing it. Isn’t this exciting!

I don’t know about you but in the fight against disease and illness, I’d rather eat my favorite foods cooked in coconut oil rich in lauric-acid than stuff down a handful of expensive antibiotics and suffer with their side effects.

Mensink, R. P., et al. Effects of dietary fatty acids and carbohydrates on the ratio of serum total to HDL cholesterol and on serum lipids and apolipoproteins: a meta-analysis of 60 controlled trials. American Journal Clinical Nutrition 2003;77(5):1146-1155.