About Me and Coconut Oil Central 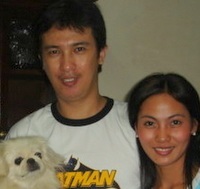 Hello! My name is Frederick Valencia and I own Coconut Oil Central.

Not long after the birth of my website, e-mails asking me about my background started to arrive. Questions like:

… and more began to pour in. That’s when I decided to create this page About Me.

I was born and raised here in the Philippines, the world’s “go-to” country for sourcing coconut oil. I have lived in Quezon City, the largest of all cities in Metro Manila, all my life.

Growing up, I developed a taste for coconut water. I love buko juice as we call it here. This was my gateway into the world of coconuts.

Taking coconut oil by the spoonful did not come until December 2006. But apparently, it has always been a part of my diet, my life. Coconut milk or gata contains significant amounts of the healthiest oil on earth and my mother loved using it in her cooking. God bless her soul (I love you, Ma!).

I was a Systems Analyst/Programmer in the 1990s. I tried to find my niche in the Call Center industry in the 2000s. But none of these paths gave me fulfillment, until I discovered the amazing but relatively hidden benefits of coconut oil.

The unjust and atrocious criticisms by its competition in the 1980s and 90s were successful in demonizing coconut oil out of our diet. And for what? Money. Eureka! I found my passion.

After this revelation, I decided to renew my love for computers and establish a website that will help clean the name and spread the very good word about coconut oil. Do a good deed and earn while at it. Not a bad idea, huh.

I frequented the Philippine Coconut Authority (PCA) and United Coconut Associations of the Philippines (UCAP) libraries for some hard-to-find, exclusive knowledge. I sent e-mails to well-known experts and authorities whenever I can’t find the facts I’m looking for.

And so I just kept on writing…

I remember building a web page a day, non-stop, for over a month. Next thing I knew, Coconut Oil Central has an army of information-rich web pages dedicated to the greatest oil on the planet.

But I’m just getting started. There’s still so much to write about. So much good stuff about coconut oil.

Need I say computers? You know I do.

When I was around 15 years old, my father, after reading some of my homework, suggested that I should become a writer. I never took it seriously. 23 years later or 9 years after he passed away, I have this to say. “You were right, Dad. You were right. Miss you…”
Coconut Oil › About Me