Trans fat ban? It’s about time! Many researchers believe that of all the dietary fats, trans fats or trans fatty acids have the most influence on the progression of cardiovascular disease.

Trans fat is an artery-clogging fat typically formed when vegetable oils are hydrogenated or hardened into margarine and shortening.

As demonstrated by numerous studies, transfatty acids are harmful in “any” amount. Unlike natural fatty acids, your body is incapable of using these man-made fat molecules in a constructive manner.

Heart Disease and Beyond

An 80,000-participant, 14-year study resulted to 939 heart attacks. According to the New England Journal of Medicine, those who consumed the largest amounts of transfats had a 53 percent higher chance of suffering a heart attack than those who ate the least amounts. And it affects more than just your cardiovascular health.

It is estimated that trans fat consumption causes at least 30,000 untimely deaths per year in the United States alone. About 15 percent of the fat in the standard American diet is transfat.

Looks like a trans fat ban should have been set in motion several decades ago. 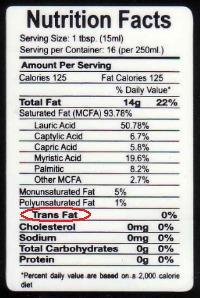 The problem with hydrogenation is that it creates artificial fats called trans fats.

Margarines and shortenings are hydrogenated oils. They are artificially created by the partial hydrogenation of polyunsaturated oils such as soybean oil, and can contain up to almost 50 percent trans fatty acids. The scary part is even non-hydrogenated oils contain them.

Conventionally processed polyunsaturated vegetable oils typically sold in grocery stores also contain some transfatty acids from the heat used in the extraction and refining process. Most vegetable oils in the market are highly processed.

Trans fats can either be monounsaturated or polyunsaturated, but never saturated.

Note that there is no such thing as monosaturated fats or polysaturated fats. Please visit types of fats based on saturation for a clearer understanding.

Coconut oil is the most saturated of all dietary fats. It does not oxidize and produce free radicals like other vegetable oils do. Not even close! It’s so stable, it protects other fats from decay by acting as an antioxidant.

92 percent saturated coconut oil is already very saturated. No need for trans fat-creating hydrogenation to healthfully serve humankind in a variety of ways.