Coconut oil myths are unfortunate and a disservice to humankind. Why people would want to destroy the good name of this valuable tropical oil, whether deliberately or out of ignorance, is truly a saddening thought.

The health blessings of coconut oil can change your life forever. So it is my sincerest wish for you to know the coconut-oil-truths and spread them all at will. Ready to separate fact from fiction? Here we go…

This is probably the biggest lie of them all. The claim that coconut oil causes heart disease by clogging your arteries (atherogenic) is without scientific basis. Yet, it never stopped leading detractors from spreading this atrocity up to now. Talk about brainwashing… 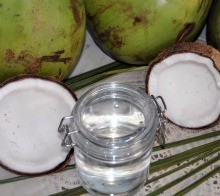 Animal fats such as lard and beef tallow are high in saturated fat just like coconut oil. In fact, coconut oil is 92% saturated. But wait, there’s more! They conveniently forgot to tell you that coconut oil’s fat molecules are predominantly Medium Chain Fatty Acids (MCFA).

Beef fat, lard, and most vegetable oils are entirely Long Chain Fatty Acids (LCFA). Relatively rare MCFAs don’t travel in your bloodstream like LCFAs do. Unlike LCFA-oils such as soybean and corn oils, MCFA-packed coconut oil goes straight to your liver where it is immediately converted into energy to power metabolism.

MCFAs and LCFAs are unlike each other. Their absorption, transport, metabolism, and uses are radically different.

Coconut oil has NO CHOLESTEROL! I don’t mean to shout but there are days when I’m just sick and tired of this mumbo jumbo.

People who take large amounts of coconut oil like the Polynesians, Indians, Sri Lankans, and my Bicolano brothers here in the Philippines have LOW CHOLESTEROL. Please help me put coconut oil myths like this to rest.

Myth #4: Polyunsaturated oils are the best and safest

Wrong! Polyunsaturated oils are the beginning of allergic leukotrienes, inflammatory prostaglandins, blood clot inducing thromboxane, and when partly hydrogenated are transformed to trans fats which are even more atherogenic.

In much simpler words, the claim that polyunsaturated oils are the best and safest dietary oils is a lie!