Parachute Coconut Oil is one of the cheapest brands you’ll find, online and offline. As to the quality, that depends entirely on you, as always.

Parachute 100% Pure Coconut Oil is a product of Marico, a consumer products and services company based in India. Other products of Marico include hair care, hair style, skin care, rice, cooking oil, etc.

In my research, I can say many enjoy this brand of coconut oil, especially the price. Compared to other brands I have looked into though, there appears to be a little more complaints than usual when it comes to freshness. In short, some consumers seem to think it’s kind of rancid.

To be honest, I haven’t tried this brand of coconut oil, yet. So I’m guessing the reason why some people think it’s rancid is due to the production process used. 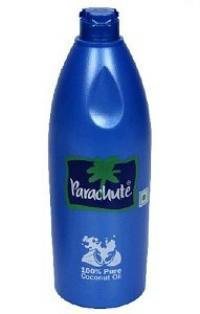 I’m not thrilled with fermented varieties (but that’s just me), which allows the coconut milk (the source of the oil) to ferment for 36-48 hours prior to extracting the oil.

When I first tried fermentation-produced coconut oil, I thought it was kind of spoiled. This could explain the comments of it being at least semi-rancid.

If my guess is correct, then there is nothing wrong with the oil. It smells and tastes that way because it’s supposed to. And I know people who prefer this variety over anything else.

I have emailed Marico inquiring about the production process used in making their coconut oil. So far, I have not received a reply. I will report on this page as soon as I get an answer.