Get Over It! Natural Coconut Oil Does Not Cause Heart Disease 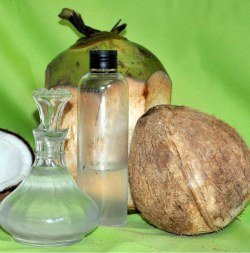 Natural coconut oil does not promote heart disease. It actually even prevents it!

All hydrogenated vegetable oils, including soybean oil and olive oil, consist of trans fatty acids or trans fats. These unnatural fat molecules are a product of technology and has no place inside your body. There is a mountain of evidence linking trans fats to cardiovascular disease.

Fractionated coconut oil or MCT oil is also man-made and a far-cry from natural virgin coconut oil. VCO contains at least 11 different fatty acids. MCT oil contains only 2. So you can’t say coconut oil encourages heart problems based on the assessment of only two fatty acids.

An examination of the medical literature exposes numerous research showing that when consumed as part of a healthy diet, natural or unrefined coconut oil does not have a negative effect on heart health. None!

On the contrary, when Felton and his colleagues analyzed arterial plaque, most (74 percent) of the oxidized fatty acids they found were unsaturated, not saturated.

33 percent and 41 percent of fatty acids in arterial plaque were monounsaturated and polyunsaturated, respectively. Not even a solitary saturated Medium Chain Fatty Acid (MCFA), the predominant fat molecule in coconut oil, was found in the plaque.