Multiple Sclerosis Causes and their Beneficial Link to Coconut Oil

MS or Multiple Sclerosis causes are directly linked to coconut oil, making it one of the best foods to consume in the treatment and prevention of MS.

While the exact cause of Multiple Sclerosis remains unknown, one theory has remained strong over the years. “MS is caused by a viral infection and inadequate sunlight exposure.”

In 2000, German researchers have shown that there may be a connection between the Epstein-Barr Virus (EBV) and disease activity in MS patients over time. The study evaluated 108 MS patients for the persistence of antibodies against EBV, Herpes Simplex Virus (HSV), and Cytomegalovirus (CMV).

All of the patients tested positive for antibodies against EBV. And out of the 19 that were followed monthly for one year, viral reactivation was seen in more than 72 percent of patients with worsening symptoms. The authors of the study concluded that EBV might be an “activator” of the underlying disease process involved in MS.

A study in 2011 has demonstrated that low levels of sunshine together with infectious mononucleosis could heighten your risk of developing MS. The researchers concluded that the effect of sunlight on generating vitamin D seems to be the most likely candidate for explaining its relationship with MS.

In fact, it was identified as far back as 1922 that the farther away you live from the equator, the greater your chances of acquiring the autoimmune disease.

These well-founded multiple sclerosis causes can be effectively addressed by using the oil of the heavenly coconut. 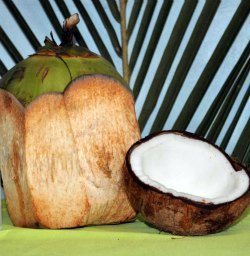 The types of fats you eat influence your body’s reaction to sunshine.

There is a large number of studies confirming lack of sun exposure as a risk factor for Multiple Sclerosis. And viral infection has always been a compelling argument ever since.

Coconut oil destroys several of the viruses suspected of playing an important role in the development of MS, specifically EBV, and allows you to get the most benefit from the sun. And that’s not theory, that’s fact!