LouAna coconut oil is one of the more recognizable coconut cooking oil brands in the United States.

Because of the refining process, RBD oils no longer contain much, if not all, of the phytonutrients found in raw, unprocessed oils. Essentially though, RBD coconut oil still contains much of the Medium Chain Triglycerides (MCT) most abundantly present in coconut oil.

MCTs are very stable, and as such, can withstand high heat used in manufacturing cooking oils. These rare fat molecules are the principal reason why coconut oil is, pound for pound, the healthiest oil on the planet. 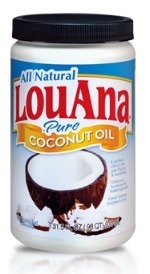 Since they pretty much have the same amounts of MCTs found in unrefined varieties, RBD coconut oils are considered healthy oils. Aside from being cost-efficient, they are also preferred by those who like their cooking oils basically bland or flavorless (it’s just individual preference, that’s all).

Born in the state of Louisiana more than 100 years ago, LouAna Foods is America’s largest independent cooking oil processing company.

Although LouAna’s core products are from peanuts and soybeans, it has evolved and modernized its facilities to include refining several other vegetable oils such as corn, safflower, cottonseed, sunflower, canola, and of course, coconut oil.