How to Prevent Food Poisoning with Super Antimicrobial Coconut Oil

How to prevent food poisoning? The best way to avoid foodborne illnesses is to strengthen your immune system. And no other fat can help fortify your bodily defenses like coconut oil can. None!

As long as your immune system is functioning normally, food poisoning or foodborne illness cannot do serious damage to your health. The worst it can do is slow you down a bit for a day or two, even less.

When you consume Medium Chain Fatty Acid or MCFA-rich coconut oil, your immune system gets a defensive boost and a break.

Your immune system gets a boost because the antimicrobial properties of MCFAs assist in eliminating harmful organisms (bacteria, viruses, parasites, etc.). It gets a break because as the MCFAs take over the job of neutralizing many of the invading microbes, your body’s defenses can focus more on cleaning out cancerous cells, toxins, and other threats to your health.

The Centers for Disease Control and Prevention (CDC) estimates that in the United States alone, 76 million people fall victim to food poisoning each year. That’s two incidences per second.

In 1993, an E. coli bacteria outbreak involving “Jack in the Box” hamburgers left 700 people ill with some suffering from permanent kidney damage and no less than four children died. E. coli approximately kills 100 people and causes sickness in another 25,000 a year in the United States alone. 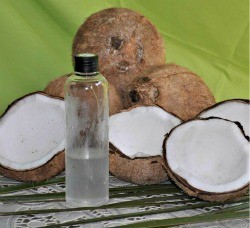 If all those people affected by the bacteria consumed enough coconut oil regularly, the possibility is many of them would not have become ill, and there’s a good chance that none would have died. That’s because E. coli, as well as countless other pathogens, are destroyed by MCFAs bountifully present in coconut oil.

More than two-thirds of the fatty acid composition of coconut oil are MCFAs, a rare type of fat molecule. There are very few natural sources of health-promoting MCFAs and most of them are found in coconut oil.

When foodborne disease strikes, your body’s recuperative abilities could be your only defense. You’d better hope that your immune system is robust enough and has the help it needs to overcome it.

So, how to prevent food poisoning?

Unless you know where your meat is coming from (preferably from trusted sources), it’s best to cook them first. Vegetables and fruits though, should be eaten raw, but only after you’ve cleaned them thoroughly.