The HIV AIDS virus dies in the presence of the great coconut oil. I know so because the first ever study on coconut oil’s performance against AIDS was conducted here in the Philippines, land of the coconut.

Just to be clear, as some are somewhat confused, HIV or Human Immunodeficiency Virus is the virus that causes the disease called AIDS or Acquired Immune Deficiency Syndrome.

As early as the 1980s, researchers have learned that Medium Chain Fatty Acids (MCFA) bountifully found in coconut oil are able to destroy HIV, the AIDS virus.

The year was 1999 and the place was San Lazaro Hospital, a facility for infectious diseases located at the heart of Manila, Philippines. For 6 months, 14 indigent AIDS patients aged 22-38 received up to the equivalent of 3.5 tablespoons daily, all of which have not received any anti-HIV treatment as they simply could not afford it.

The study ended with 8 of the 14 subjects having a lower viral count, 11 regaining weight, and 5 having a higher number of white blood cells that protect the body from infection and disease. This pioneering trial proved that coconut oil does have a potent “antiviral punch” and can effectively diminish the deadly HIV load of AIDS patients.

But if MCFAs do kill HIV, then why isn’t anyone making a coconut oil-based cure for AIDS? Good question! The sad answer is… MCFAs are natural substances that cannot be patented. Hence, there is no money to be made. Sounds familiar, huh…

A typical AIDS patient can easily spend over $15,000 a year using HIV drugs, not to mention, the barrage of nasty side effects he or she is bound to experience. On the other hand… 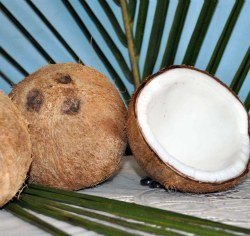 Unlike standard drugs that attack the genetic material of the HIV AIDS virus, MCFAs break the virus apart. Simple and effective!

These special fat molecules weaken the lipid (fat) membrane or coating of the HIV and open it up, spilling its guts. No wonder coconut oil is such an efficient “antimicrobial” food.

MCFA-packed coconut oil costs just a tiny fraction, has no undesirable side effects, and neutralizes not just viruses, but a host of other harmful microorganisms such as bacteria, yeasts, worms, fungi, parasites, etc.