Healthy cooking oil myths will ruin your health. Get the facts straight and you’ll understand why coconut oil is the healthiest cooking oil in the world.

From all the research that has been done to this point, coconut oil appears to be the best oil to cook with. It’s the most harmless and nourishing all-purpose oil you can use.

Let’s look at some of the myths aimed at coconut oil to demonize it and take away its rightful place as the undisputed “king” of all cooking oils.

Fact: For the “nth” time, coconut oil has NO cholesterol and has fewer calories than any other cooking oil. Please help me put this myth to rest.

Fact: People who consume huge quantities of coconut oil like the Indians, Sri Lankans, the Polynesians, and my Bicolano brothers here in the Philippines, all havelow cholesterol and rarely develop heart problems. 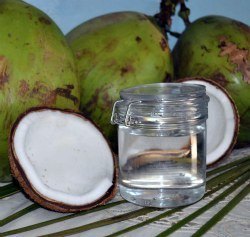 Fact: Many people, including doctors, don’t know that there is more than one type of saturated fat. The saturated fatty acids in animal fats are all Long Chain Triglycerides (LCT) or Long Chain Fatty Acids (LCFA).

Fact: Not true. Olive oil is not even a healthy cooking oil. You should never cook with olive oil.

Its high unsaturated fat content (77 percent monounsaturated, 9 percent polyunsaturated) makes it extremely prone to oxidation (spoilage), which is involved in the development of many types of cancers.

Fact: False. Polyunsaturated cooking oils are the worse! They go rancid easily and promote cancer by generating huge quantities of free radicals that attack your cells.

Polyunsaturated fat consumption is associated with macular degeneration and encourages vitamin D deficiency. They have an acidifying effect on your body and when partially hydrogenated are transformed into harmful trans fats.
Coconut Oil › Long Chain Fatty Acids › Healthy Cooking Oil