Frequent nosebleeds, unless caused by an injury, are often influenced by the climate. Coconut oil can help stop them from happening in the first place.

When your nasal cavity dehydrates due to cold and dry air, your mucus membranes crack and become itchy.

This results to an almost irresistible urge to scratch the dry cracked skin in your nasal passages, which won’t take much to cause bleeding.

If the culprit is the drying and cracking of the skin and mucus membranes along the inside wall of your nasal cavity, then a logical solution would be to keep the cavity soft and moist at least most of the time. Right?

Coconut oil can easily soften and moisten your nasal passages! Here’s how… 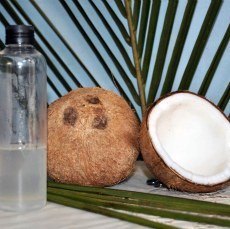 Just liberally coat your finger with coconut oil and rub it on the inside of your nostril. For best results, let the oil drain into your sinuses by lying down on your back.

If there is already bleeding, coconut oil can still help…

To stop the bleeding, just do the same by rubbing the insides of your nostrils with the oil. But this time sit down, lean forward and put your head down (mouth open for easy breathing) to avoid swallowing blood.

For heavy bleeding, inhaling or dabbing (use a moistened Q-tip) a little cayenne pepper inside your nose can stop it instantly. Cayenne is very good at quickly causing blood to clot naturally, thus preventing bleeding.

Then for good measure, glaze the insides of your nostril with coconut oil as described above. Apart from softening and moistening your mucus membranes, no other oil promotes healing and recovery better than coconut oil. None!