Cooking with coconut oil helps you shed off up to almost 40 unwanted pounds each year. No tricks. No gimmicks.

You don’t even have to change anything else in your diet like reducing calorie consumption. All you got to do is have an oil-change. Coconut oil is so efficient at stimulating metabolism, it is being recommended as a means to treat obesity and low thyroid function (hypothyroidism).

Coconut oil is almost entirely (92 percent) saturated. But aren’t animal fats such as beef fat and lard which are believed to be common contributors to weight-gain considered saturated fats, too? Yes, but not many people know that there is more than one kind of saturated fat. More on this in just a bit…

The table below shows the constitution of common dietary fats and oils in relation to each other.

Composition of Dietary Oils and Fats

Animal fats including soybean oil, corn oil, and most all other dietary fats are made entirely of Long Chain Triglycerides (LCT). Coconut oil is different because most of it is composed of a rare type of saturated fat molecules called Medium Chain Triglycerides (MCT). The main difference between LCT and MCT is how they are digested. 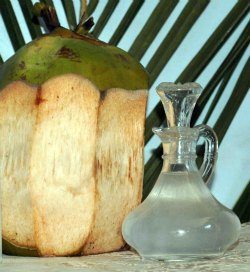 In a nutshell, LCTs are hard to digest, and for the most part, circulate throughout your body. As long as you’re eating enough to satisfy your energy requirements, LCTs in your food will end up as body fat, hence, the extra weight.

MCTs, on the other hand, are easy to digest and sent straight to your liver for the production of energy, not body fat. Unlike LCT-fats such as animal fats and most vegetable oils, your body uses MCT-packed coconut oil primarily to make fuel for metabolism rather than store it as fat cells.

Researchers in Canada’s McGill University concluded that if you change all the LCT-oils in your diet like soybean oil into MCT-oils like coconut oil, you can lose up to 36 pounds of excess fat per year. Again, all you need to do is change the oils in your diet into coconut oil. Nothing else!

Cooking with coconut oil makes it possible to Eat Fat and Lose Fat!