Coconut oil stroke benefits begin with addressing heart disease. You must see first the importance of coconut oil in the fight against heart disease to fully appreciate what it can do to prevent a stroke. Please bear with me a little…

Hardening of the arteries or atherosclerosis is the most frequent cardiovascular disease. It’s crucial because it sets the stage for stroke, not to mention heart attack and hypertension. Heart disease is the leading cause of death in Western countries and it has been for decades.

The Ruin of Coconut Oil?

You could probably say that because of heart disease, coconut oil has been, still is, and will probably endure more years of atrocious maligning, mostly in the name of profits. Very unfortunate…

“It’s simply bad for the heart! It’s an artery-clogger! It’s full of cholesterol! It’s a saturated fat like animal fats and saturated fats are dangerous! It increases cholesterol and causes heart disease! Polyunsaturated oils are the best and safest!”

These are the lies that bombarded us with vicious and slanderous efficiency particularly in the 1980s and 90s. The American Soybean Association (ASA) and other enemies eventually succeeded in banishing coconut oil from our food. The coconut oil stroke beneficial link was cut.

But I believe the question we should all be asking is…

Why is Heart Disease Still the No. 1 Killer?

If coconut oil is such a bad food for the heart, why is it that after casting it out from the American diet, heart disease became the leading cause of death in the United States?

And if coconut oil is so not good for the heart, why is it that we Filipinos, Sri Lankans and Polynesians just to name a few, all of which are coconut oil-eating people, are not dying of heart disease left and right? On the contrary, we have the lowest coronary heart disease rates. If this doesn’t shock you or at the very least make you scratch your head, then I don’t know what will. 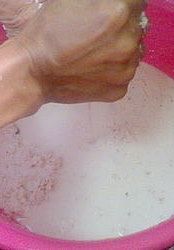 Strokes and other serious heart disorders are usually a consequence of atherosclerosis. When blood flow in the coronary artery which feeds the heart is blocked, it causes a heart attack. When the blood flow is blocked in the carotid artery going to the brain, the result is a stroke.

It’s time to answer back the baseless accusations above. Remember, coconut oil stroke rewards are closely linked to a healthy heart. Let’s fight lies with truths.

Cultures who consume large amounts of coconut oil have low cholesterol levels and rarely suffer from a stroke or develop heart problems! Polyunsaturated oils are not the best and certainly not the safest! They are the sources of blood clot inducing thromboxane, allergic leukotrienes, inflammatory prostaglandins and when partially hydrogenated are converted to trans fatty acids which are even more atherogenic!”

Coconut oil stroke benefits help keep your brain and heart healthy. It doesn’t contribute to the arterial blockage of plaque which leads to atherosclerosis. Coconut oil doesn’t cause a stroke or heart disease. It actually even prevents them!