Coconut Oil Health Benefits: Are You Ready to be Amazed?

Coconut oil health benefits, overall, are one-of-a-kind. Thousands of research, testimonies and reports clearly demonstrate that no fat/oil on the face of the earth can match its remarkable healing and protective blessings.

A Tradition of Excellent Health

Even before the onset of western civilization, the coconut was already busy nourishing tropical colonies all over the world.

Wherever you go, you’ll notice that people who regularly consume coconut products such as coconut milk, coconut water, coconut meat, and of course the oil are generally leaner, stronger and healthier.

Each fat or oil is made of fat molecules called fatty acids but not all are the same. If you’re confused, a fat is solid at room temperature while an oil is liquid.

The great majority of fats you eat, (saturated or unsaturated, plant or animal source), consist of Long Chain Fatty Acids (LFCA) or Long Chain Triglycerides (LCT). This is where coconut oil emphatically differs from other fats.

Coconut oil contains 92% saturated, 6% monounsaturated and 2% polyunsaturated fats. 64% of its fatty acid content are Medium Chain Fatty Acids (MCFA) or Medium Chain Triglycerides (MCT). It’s these MCFAs or MCTs that make coconut oil a cut above all other oils.

Unlike others, coconut oil predominantly consists of MCFAs which are responsible for its healthful properties. You could say that MCFA is the muscle behind coconut oil.

MCFAs are instantly converted into energy, similar to a carbohydrate. Unlike LCFAs that mainly comprise other oils, MCFAs do not circulate in the bloodstream to the same extent. Not even nearly! MCFa-rich coconut oil is sent straight to your liver to produce energy right away.

Although MCFAs act like carbohydrates, they do not raise blood sugar. So if you’re diabetic, have no fear. They can even help you control sugar cravings and reduce hypoglycemic symptoms.

Detractors say that coconut oil promotes heart disease. Yeah right! What’s next? Pigs can fly? The fact is, people who consume huge amounts of coconut oil such as the Polynesians, Sri Lankans and the Bicolanos here in the Philippines have low blood cholesterol levels and almost never develop heart problems.

These same mud-slingers even went as far as burying scientific journals that showcase tremendous coconut oil health benefits. No wonder many people in search of good health the natural way don’t even have a clue about its health-promoting qualities. It’s amazing what people can and will do in the name of the almighty dollar.

Coconut oil health benefits are unmistakably evident in numerous illnesses, including deadly ones. For instance, research has shown that it could prove to be a main weapon in the battle against AIDS. Recent anecdotal studies have shown coconut oil to have a very positive effect against the HIV virus. 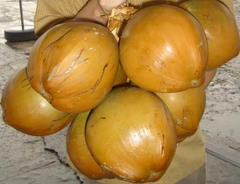 MCFAs can stimulate metabolism by encouraging your thyroid to function optimally, or vice versa. This is why coconut oil is aptly called, the fat that can make you thin.

The following are just some of the different viruses and bacteria that coconut oil kills:

These are just some of the innumerable coconut oil health benefits that have been hidden from you for decades. Hidden by people who benefited from the coconut oil industry’s demise. The truth is out now and out for good.

All these curative and safeguarding blessings are backed up by volumes of genuine research and testimonial evidences. Pay close attention to MCFA-studies because it was the only way, back then, for researchers to get funding to study the health properties of coconut oil – nature’s richest source of MCFAs.