Coconut oil and candida don’t like each other at all. But while candida cannot do anything about it, coconut oil can, by killing this yeast-like fungus all day and night long.

It doesn’t matter if you’ve been suffering for years. You can count on coconut oil to do its impressive “antifungal” job.

I’ve seen persistent skin rashes disappear within a day or two. Even systemic candida infections (Candidiasis) that have been wreaking havoc for years subside and are eventually put under control within a matter of weeks.

But how is this possible? The answer lies in its natural chemical composition.

Coconut oil is unique because it contains a special kind of fatty acids you won’t find in other dietary oils. It’s called Medium Chain Fatty Acids, or simply MCFA. There are three types of MCFA (lauric acid, capric acid and caprylic acid). And all three are found in coconut oil, in abundance!

All of coconut oil’s MCFAs have antifungal properties, capable of freeing you from this all-too-common health problem, and in a span of time you wouldn’t think possible. 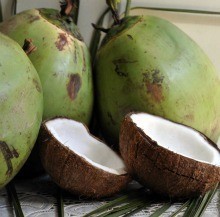 Candida albicans or C. albicans, the most commonly known candida species, is a yeast or single-celled fungus that hangs out in your intestinal tract and mucous membranes. Left unchecked, it can grow out of control and overrun your digestive tract, leading to candidiasis.

Some of the symptoms associated with systemic yeast infections are:

Researcher Bergsson and associates (Antimicrobial Agents and Chemotherapy) showed how both lauric and capric acids (most plentifully found in coconut oil) were able to kill three strains of C. albicans. They concluded…

“these MCFAs (capric and lauric) can be used to treat infections caused by Candida albicans and other fungi that infect the skin and mucous membrane.”

But let’s not forget the third member of the MCFA “Big Three.”

Caprylic acid is one of the most powerful and safest natural substances on earth that can destroy candida and other harmful yeast and fungi. It’s so potent that supplement makers add it to their products used to combat vaginal and widespread yeast diseases.

Pound for pound, when it comes to boosting your immune system, no dietary oil compares to the overall greatness of coconut oil. None!

MCFA-packed coconut oil exterminates fungi and a wide spectrum of other troublemakers such as viruses, bacteria, parasites, etc. So when it’s not busy neutralizing candida and other harmful fungi/yeast, it’s probably eliminating bacteria here and viruses there. Coconut oil even dampens the damaging effects of toxins and stimulates the production of white blood cells that attack cancerous cells.

All these activities can only make your immune system that much stronger, and no dietary oil does it better than coconut oil!

One of the Best Foods to Fight Candida

Of course, there are other foods you can eat to keep candida at bay. But in the fats and oil kingdom, Coconut Oil Is King.

The main weapon of coconut oil for candida, MCFAs, don’t merely interrupt the chemical signals or processes involved as candida cells try to multiply quickly and create mayhem in your body. It’s actually much more brutal than that.

MCFAs “physically” assault the candida gremlins, disintegrating its lipid coating which leads to their untimely but welcome death. It’s a very efficient microbe-inactivating system and one that candida and other troublemakers can’t escape from. That’s the vaunted coconut oil candida-killing machine!