Coconut flour or coco flour boasts of containing the highest percentage of dietary fiber compared to other flours.

Fiber continues to convince researchers of its can’t-do-without health benefits. And coconut fiber is at the forefront as it contains more fiber than many other sources.

Made from coconut meat, coco flour is 61% fiber with the rest composed of water, fat, protein and carbohydrate.

Coco flour has a lower digestible carbohydrate content and holds over four times and over twenty times as much fiber as soy flour and enriched white flour, respectively.

Below is a graph demonstrating the superiority of the flour derived from the coconut as compared to others. 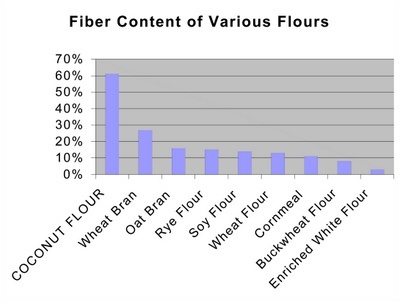 Because it doesn’t contain the protein gluten responsible for making standard bread light and fluffy, you might not want to use 100% coco flour in place of wheat or other flours. Unless of course you prefer your bread hard and dense.

When making quick breads for example, you might want to combine coco flour with other flours. You can replace up to 25% of say, wheat flour, and still boost the fiber content substantially.

Now, being gluten-free doesn’t mean it lacks protein. Nope! Coco flour has more protein than rye, cornmeal and enriched white flours, and has about the same as whole wheat and buckwheat flours.

Besides, the intestinal disorder celiac disease is becoming more and more common. Caused by the inability to metabolize gluten, it affects 3 million Americans and counting.

The properties of coco flour are considerably unlike other flours, needless to say.

With the right approach, you can create savory breads, cakes, cookies and a multitude of other flour-based foods using only coco flour. And the finished products are every bit as good, if not even better.