Coconut Cream and Coconut Milk: Are They The Same?

Coconut cream and coconut milk are basically one and the same. The only difference between them is one has a higher fat content.

To illustrate how similar or different they are, let’s talk a little about the production process.

Coconut milk is achieved by extracting the juice out of the white coconut meat or kernel.

It has a thick creamy texture and looks very much like cow’s milk. If you let the milk sit for a while, it will separate with a creamy layer on top. The layer on top is the one and only coconut or coco cream. Tada!

The bottom portion of the milk is skim milk, in case you’re wondering. Its fat content is lower and has a very mild taste.

Now you may encounter a product called cream of coconut. This, too, is different. Cream of coconut is very sweet coco cream because of the added sugar. It is used in making sweet desserts and beverages.

Blend It or Juice It 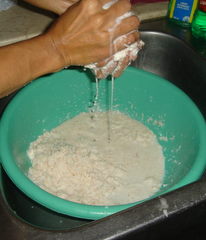 There are two methods of making coco cream. You can use a “blender” or you can use a “juicer.” I prefer using a juicer because it’s much easier and you tend to produce more.

A lot of people who are unfamiliar with coco cream expect it to be sweet. It’s not. If you want it sweet, simply add sugar (natural sweetener is best) or use cream of coconut, as mentioned above.

Many prefer their chowders, curries or sauces unsweetened. At any rate, coco cream is very versatile. Just like cow’s milk, it can be used in a multitude of ways, in both sweet and non-sweet foods.