Benefits of Coconut Oil: The Simplest and Easiest Way to Supercharge Your Health

The health benefits of coconut oil are so plenty, people rightfully call it, “The Drugstore In A Bottle.” You will not find a dietary oil or fat that can beat what coconut oil can do for your overall well-being. You won’t.

MCTs digest like carbohydrates so they rarely get deposited in your fat cells. They provide a quick source of energy and revs up your metabolism. MCT-rich coconut oil is pro-energy, not pro-fat!

From making skin and hair young-looking, to taming deadly pathogens, coconut oil uses are wide-ranging. MCFAs so generously found in this humble tropical oil can help: 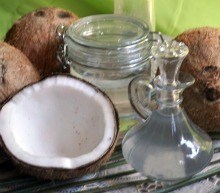 Much of the benefits of coconut oil would not have been possible if not for MCTs or MCFAs “rarely” found in nature.

At 92 percent saturated, coconut oil is highly resistant to oxidation (spoilage) and free-radical destruction. It doesn’t get rancid easily. Unlike other vegetable oils like soybean and corn oils, properly prepared coconut oil can stay fresh for at least three years, even without refrigeration.

Coconut oil functions as an antioxidant protecting against damaging free radicals that are often produced by toxins.

These are just some of the benefits of coconut oil, The King of Oils. Take it by the spoonful or use it in place of other oils. Either way, you’re on your way to better health.
REFERENCES: