Benefits of Coconut Milk: Same as Coconut Oil And Then Some

Ten ounces of coconut milk contains about three and a half tablespoons of coconut oil. That’s the maintenance dosage for an average-sized adult.

10 oz isn’t much at all when used for cooking. So consuming coconut milk could be an easy way to incorporate the world’s healthiest oil into your diet.

Unlike coconut oil, coconut milk contains proteins. And because it has no lactose, it’s an excellent substitute for dairy milk. If you’re lactose-intolerant, and many people are, coconut milk is an absolute God-send. 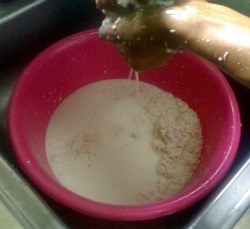 Coconut milk is easier to extract, more versatile and can be used in far more ways in food preparation. It is not sweet like dairy milk so it can be used to make chowders, curries, soups, sauces, desserts, etc.

Great for Your Hair

When it comes to hair care, some people say that the benefits of coconut milk are better than just the oil. Its protein component has a closer affinity with hair proteins, thus further reducing hair protein loss.

Why Not as Popular as the Oil?

Will all the above advantages, why is coconut milk not as popular as coconut oil?

Well, because of its high content of moisture and other organic components, fresh coconut milk spoils quickly. You have to use it soon after it is made. Four days is the longest it will last in the refrigerator.

At room temperature (28-30 degrees Celsius), it will spoil after only a few hours. Thus, you virtually have to undertake the tedious job of extracting coconut milk each and every time you need it.

Coconut milk powder will certainly last longer but you’ll have to make sure it’s not pasteurized. Pasteurization strips off a great deal of the nutrients. For most people, it’s almost impossible to find non-pasteurized coconut milk powder.

Coconut oil, on the other hand, can stay fresh for at least two years, with or without refrigeration. There is also no shortage of high-quality coconut oil. Any decent health food store should carry a decent line of coconut oil products.

Because coconut milk contains a good amount of the oil plus protein and other nutrients, not to mention lactose-free, it can be an “all-purpose” fixture in your kitchen. A perfect complement to the greatest oil on earth.